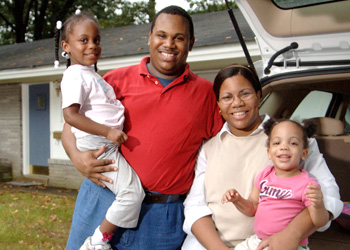 What do you call a young family consisting of a husband and wife and two children under the age of five that move into a four bedroom, three bath, 2,063 square foot home? I don’t know what you would call them, but they call themselves investors. Thomas Arnold says that they have invested in themselves by buying property and now have the ability to begin creating their own wealth. Thomas and Tisha look optimistically toward the future and know that this initial investment is just the beginning.

The end result of becoming homeowners was all important however, Tisha states that the most valuable outcome from participating in the Asset Builders program was learning about budgeting, credit cards, and saving money. Tisha goes on to say, “participation has shown me that I don’t have to spend every penny I have. I can save for the future.” Thomas adds, “we now look forward to talking about finances and having money to give and not just use for personal reasons.”

As advice for others considering joining the IDA program, Tisha advises, “attend the classes and learn from them and save your money consistently.” Thomas adds, “stick with the program even if you have to get out temporarily, get back in after you’re back on your feet again.” The Arnolds speak from experience but were able to regroup by sacrificing and showing patience in the home buying process and ultimately achieved their savings goal and their ultimate goal of homeownership.