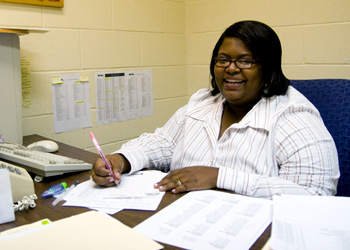 When Carlecia Gentry-Hoskins started attending Phillips Community College of the University of Arkansas (PCCUA), she was a single mom working a full time job with a full schedule of classes. The stress of it all was starting to show in her grades; and, as a result, she stopped attending classes. Mrs. Hoskins knew she would finish school, but, like most in similar situations, the time frame became “one day”. She learned about Career Pathways through advertisements and decided to look into it and see if it was something that could help her achieve her goals. Mrs. Hoskins said her hardest struggles were providing childcare and developing good study habits. Career Pathways was able to help her with those barriers.

Mrs. Hoskins is now married and a mother of two boys. In May 2007, she graduated with an Associate in Early Childhood Education from PCCUA, where she is currently employed, and is continuing her educational goals to get a BA in Early Childhood Education. Mrs. Hoskins advises others not to just see the advertisements and ignore them but to look into the program. She says everyone should take advantage of the resources offered because they are there to help.