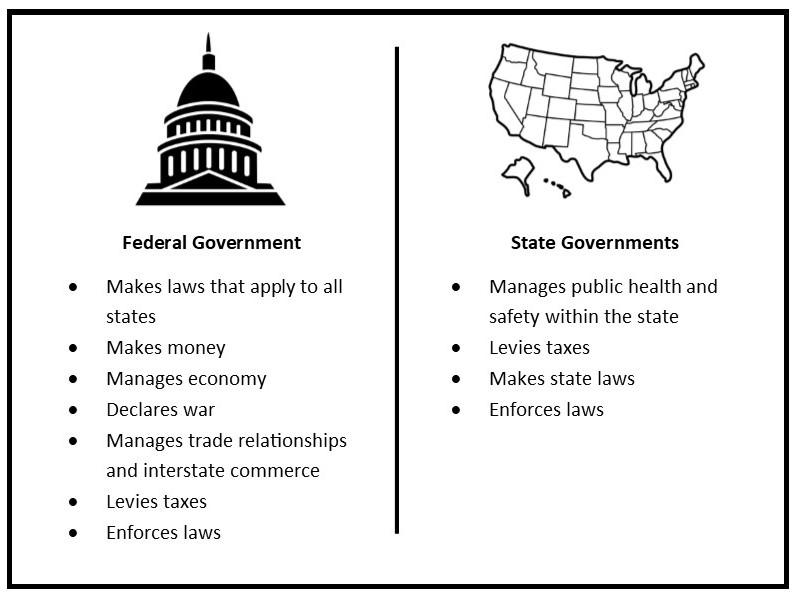 Editor’s note: This is the fourth in a series of blog posts about the legislative process on the state, federal, and local levels, and what you can do to help create and influence policy as a citizen. Entries from the rest of the series are linked at the bottom of the post.

We now have an idea of how to reach our state policy makers. What about the policy makers at the national or federal level? We discussed a little bit about the differences between federal issues and state issues last week. Here’s some additional information. The federal government makes laws that apply to the whole United States; it also makes money, manages the economy, declares war, manages trade relationships between the United States and other countries and among the states. The states’ government main role is to manage public health and safety within its borders. Both states and the federal government can levy taxes and make and enforce laws related to their respective roles.

Determining whether an issue that you’re concerned about is a federal issue or a state issue can sometimes be confusing. Be sure to look at the list above to help guide you in determining who to reach out to and where to engage.

The federal government has three branches (just like the states): executive (the President and the agencies of the federal government), legislative (Congress – made up of the House and the Senate), and the judicial branch (the court system all the way up to the Supreme Court). For our purposes, we are mostly concerned with the making of laws (or preventing a law from being enacted) and rule-making.

This is a major difference between the Mississippi and Arkansas state governments and the federal government. While at the state level, we have one state senator and one state representative, at the federal level each state has two senators who represent the entire state.

The House of Representatives, though, is apportioned similarly to the way that the State House is divided – by population and geography. The US House has 435 members and after each decennial census, the states are allocated a number of representatives based on population.

Remember that you have three contacts (both senators and one representative) to make when you are doing outreach to your federal delegation.

Once laws are passed in Congress and signed by the President, the responsibility for implementing the law usually falls on a federal agency. The agency will write rules that will provide the details on how the law will be implemented. Once those rules are written, the public will have a chance to read the proposed rule and give their input during a public comment period. More detail about the rulemaking process can be found here. When we’re concerned about a rule that is being put in place or one that could be changed, we’ll want to reach out to the agency responsible for the rule.

One issue that we’ve recently tackled is a rule related to payday lenders. In this case, we reached out (and encouraged you to reach out) to the Consumer Financial Protection Bureau (CFPB) to ask them to keep in place a well-researched rule to protect borrowers.

Images for the header image courtesy of The Noun Project.