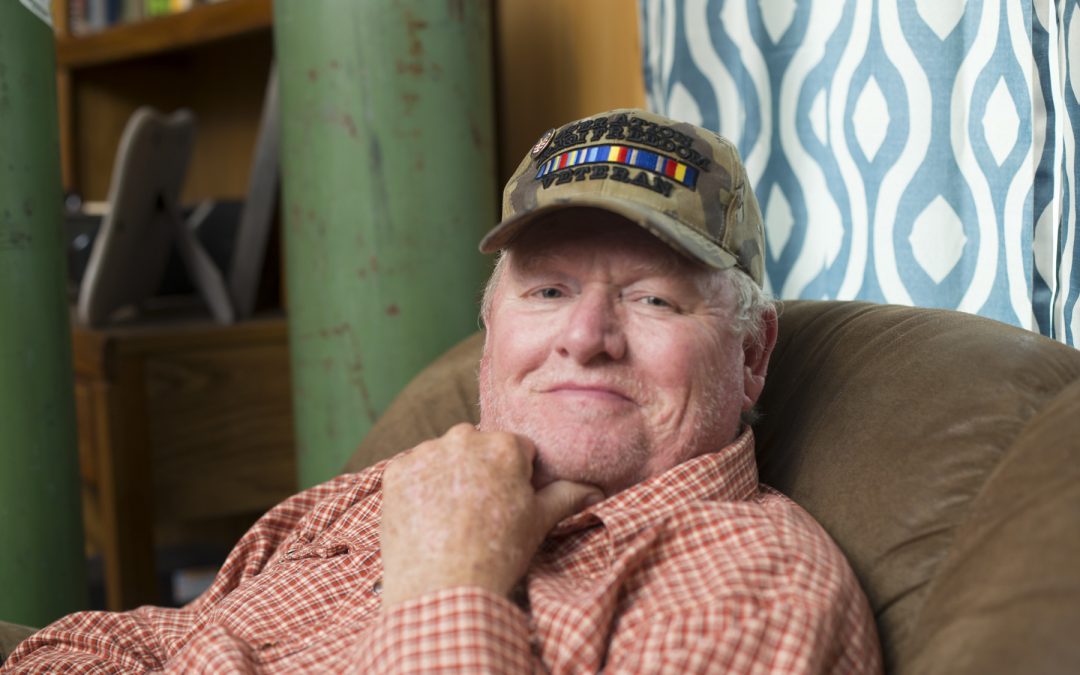 ARKADELPHIA, ARKANSAS, March 31, 2017 — Retired Sergeant Joe Braswell, now 53, wasn’t a young recruit in 2003 when servicemen and women were getting called to fight in the Iraq War. In fact, he had already put more than 20 years into his military service by then and was thinking about retirement.

But then he started worrying about the many young service members who were headed to Iraq.

Mr. Braswell was activated in March 2003 with the Arkansas Army National Guard 39th Infantry and was deployed a year later from Fort Hood, Texas, to Baghdad where he served as a cook and a truck driver transporting military supplies. He and his team cooked for as many as 600 service members at a time before he returned home in 2005.

“I was like a daddy to many of those young guys,” Mr. Braswell said. “I wanted to make sure they were well fed.”

Several years later, in 2009, Mr. Braswell received a 100 percent disability rating on lung damage caused by exposure to burn pits in Iraq and a 60 percent disability rating on his heart due to previous damage that occurred during active duty training — something that he didn’t know about during his Iraq tour. To top things off, he suffered from a persistent MRSA infection that began in Iraq and required two years of antibiotic treatment after his return to the states.

Once back in the U.S., Mr. Braswell worked several years for Georgia Pacific but his health began to fail and he eventually was no longer able to work. His wife, Janet, 48, retired from her job at a bank about three years ago to become his full-time caretaker.

The couple had begun to build a larger bathroom several years ago off the master bedroom but they were unable to complete the work because of Mr. Braswell’s deteriorating physical condition. He now has oxygen available to him at all times, although he doesn’t always require it.

A $7,500 Housing Assistance for Veterans (HAVEN) grant provided by the Federal Home Loan Bank of Dallas (FHLB Dallas) and Southern Bancorp provided the funding to finish the work.

Bill Wright, West Region CEO of Southern Bancorp, said upon learning Mr. Braswell’s story, he knew he had to help him.

“Providing assistance to veterans is of great importance to Southern Bancorp,” said Mr. Wright. “We recognize the deep debt owed them by all Americans for their service and sacrifice. Our commitment to creating economic opportunity extends to all those willing to work for it.”

The project involved taking space from a walk-in closet to expand a bathroom to include a large, roll-in shower that includes a bench and grab bars. The shower allows for a wheelchair should Mr. Braswell need one in the future. Other renovations included modifications to make the bathroom handicapped-accessible.

HAVEN is a unique grant program offered by FHLB Dallas through its member institutions, such as Southern Bancorp, that reaches out to veterans and active-duty service members who have been disabled in the line of duty since September 11, 2001. It provides grants up to $7,500 to support necessary home modifications. To qualify, veterans must also meet income eligibility requirements.

Mr. Braswell gets dizzy and short of breath easily so the shower seating and grab bars have provided a level of independence he hasn’t enjoyed for many years, he said. “It’s been a real blessing and a burden that has been lifted.”

Mrs. Braswell said renovations would have continued to languish without the grant.

“I don’t know how long it would have taken to fix the bathroom if it weren’t for the grant,” she said. “We are so thankful for the help from Southern Bancorp and FHLB Dallas as our only income is my husband’s disability pay.”

Greg Hettrick, FHLB Dallas first vice president and director of Community Investment, said HAVEN is an example of how FHLB Dallas and its members, such as Southern Bancorp, partner together to provide local communities with services often not available at nonmember banks.

“We are honored to help someone who gave nearly 30 years in service to his country, and we appreciate Southern Bancorp’s commitment to the HAVEN program,” said Mr. Hettrick.

This year, FHLB Dallas has made available through members a new $75,000 allocation to the program. The program launched in 2011 with $250,000 set aside for the program.

Southern Bancorp, Inc., a bank holding company; Southern Bancorp Community Partners, a tax exempt lending and development organization; and Southern Bancorp Bank, one of America’s largest rural development banks were founded in 1986 by then Governor Bill Clinton, Wal-Mart Chair Rob Walton, the Winthrop Rockefeller Foundation and others who were concerned about the economic decline of rural Arkansas. All three are U.S. Treasury certified Community Development Financial Institutions (CDFIs) collectively known as “Southern.” With $1.2 billion in assets, 80,000 customers at its 44 locations in Arkansas and Mississippi. On the web at banksouthern.com & southernpartners.org.

About the Federal Home Loan Bank of Dallas

The Federal Home Loan Bank of Dallas is one of 11 district banks in the FHLBank System created by Congress in 1932. FHLB Dallas, with total assets of $54.2 billion as of December 31, 2016, is a member-owned cooperative that supports housing and community investment by providing competitively priced loans and other credit products to approximately 850 members and associated institutions in Arkansas, Louisiana, Mississippi, New Mexico and Texas. For more information, visit fhlb.com.

This press release was originally released on the FHLB Dallas website.